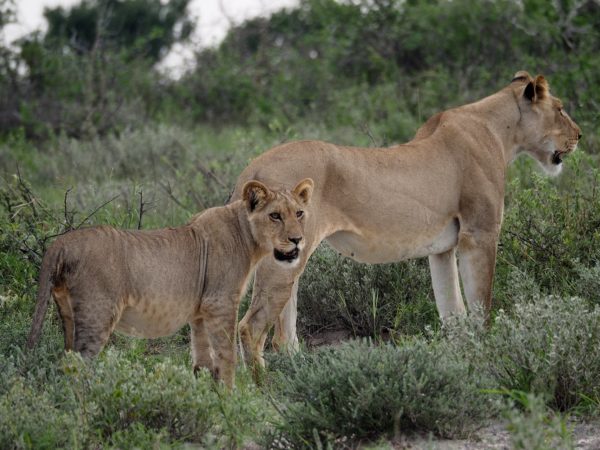 The increasing cases of human and wildlife conflicts in Ghanzi commercial farms have reportedly sparked retaliatory killings of lions by cattle farmers in the area.

However, its proximity to the Central Kalahari Game Reserve means the cases the of predators’ attacks on cattle are rife. This has led to farmers resentment and retaliatory killings of lions and other predators.

A workshop organised by the Department of Wildlife and National Parks (DWNP) at Maun Lodge recently heard about how the escalation of the conflict with  lion populations bearing a brunt as farmers shoot them in retaliation for preying on cattle.

A DWNP official told the workshop that a single farmer in Ghanzi has already shot down a total of 26 lions after they killed his cattle. The lions died   in different shooting incidents after they had crossed farm fence to kill cattle.  More cases of retaliatory killings are reported on weekly basis according to the information presented during the workshop.

Wildlife Conservation and National Parks act of 1992 allows for the killing of any animal that has caused damage or is likely to damage property. The Act mandates all farmers to report trophies of the killed animals that have caused damage to DWNP or police before they could be compensated by Government. However, many commercial farmers in Ghanzi are not interested to access the compensation as they complain that it too little preferring to exterminate the lions.

Onosi Dithapo is the chairman of community-based organisation, Xwiskarusa, a trust mandated to prudently manage natural resources in the vicinity of the Ghanzi farms. Dithapo confirmed the escalating conflict to The Okavango Express. ‘’ yes, that is true. The farmer has killed many lions. It is no secret because the law allows farmers to kill all problem animals that pose danger to livestock. The farmer in question reported all the cases to DWNP.’’

Dithapo revealed that more lions are dying in this deadly conflict warning an intervention is needed urgently.

Dithapo told this publication that they are worried about this escalation and have made a suggestion to DWNP to include lions in the hunting quota to benefit the farmers, so they see a need to conserve the lions population. ‘’26 lions killed by a single farmer is a huge number. That’s an entire lion pride. Giving farmers a trophy hunting quota, say one lion to hunt so they could use the funds to offset damage caused could help to prevent loss of lions population as farmers would see a need to conserve them than to eradicate entire pride like its happening at the moment.’’

In March this year, Minister of Tourism, Natural Resource and Conservation Philda Kereng when presenting her ministry budget to parliament said:

“My ministry is exploring new quota system for ‘ problem animals ‘ that cause damage to farmers crops and kill livestock. This new programme would permit farmers to sell the offending animals as part of hunting packages in and around farming areas. It is expected that this strategy would derive higher levels of income from problem animals as opposed to the current problem animals control measures where animals are killed without any financial value derived from their trophies. Details of this scheme which will cover both carnivores and herbivores will be discussed.’’

DWNP Director, Dr. Kabelo Senyatso confirmed rising cases of Lions- human wildlife conflicts in Ghanzi farms but was however quick to explain that there is an ongoing moratorium for trophy hunting of lions. ‘’ the moratorium could be reversed. But, first we need to undertake census of lion and other carnivores in Botswana to know their number. We have an ongoing project to install camera traps nationally to count all the carnivores. Our hunting quotas are guided by science and research so if from our upcoming count we discover that the  lions numbers  could be opened for trophy hunting that would be considered.’’

The Hunting Review workshop amongst other things discussed modalities of how trophy hunting could be best implemented nationally to boost conservation.

According to Food and Agriculture Organization the impact of human and wildlife conflict is more serious in the tropics of the developing world than in developed world because of these countries dependence on livestock as livelihood strategy and source of income.