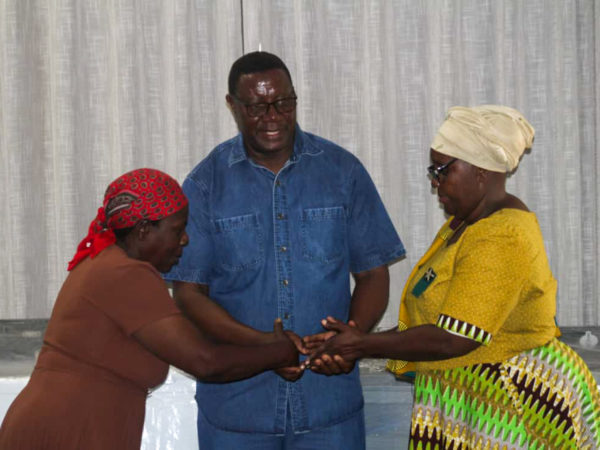 Okavango Human Wildlife Conflict Foundavtion (OHWCF) recently put a smile on the faces of two women whose lives changed after they were attacked by wild animals.

The recipients of this noble gesture are two women: Nkoketsang Monnawatsheko and Buchilani Masole whose life changing encounters with a hungry crocodile and elephant respectively, left them with permanent injuries that have changed their lives.

One of the recipients, Nkoketsang Monnawatsheko (58) was attacked by a crocodile in Maun at Rileys Bridge while together with her daughter, Cecelia Monnawatsheko (42) they were gathering water lily (Tswii) and fish.

Tswii is an aquatic plant popular in the Okavango Delta and the outer rivers. It is a popular relish for local people who brave the crocodile infested rivers to dig the tuber like potato. The potato is mixed with meat and cooked and the end product is a yummy relish known as ‘Tswii.’

On 29th November 2020 while the duo was harvesting Tswii,’ Nkoketsang’s elderly daughter, Cecelia was attacked by a crocodile in the Thamalakane River just a few metres from her mother. Fearing for the life of her daughter, Nkoketsang was forced to put up all the motherly courage: stabbing the reptile with the harvesting knife.

‘’ from nowhere a crocodile appeared and grabbed by daughter. I knew I had to act decisively or else it was going to overpower, drown and take her away. I took two steps forward and unleashed the knife on the crocs neck. It felt the pain, let go of her and we quickly tried to run to the safety of the nearby river bank.’’

Explaining about her ordeal, Nkoketsang said they had almost reached the river bank when she tripped and fell. Her daughter tried to pull her out but the mother was too heavy. Quickly the hungry crocodile resurfaced and grabbed her on the right arm. The daughter had no choice but to face her nemesis again, this time picking up a stone, smashed in in to the crocs head. For a second time, the croc let go and vanished in to the river. But Nkoketsang had sustained injuries on her arm.

‘’ I was injured on the shoulder and my arm was amputated by the croc. We spent prolonged time in the hospital. Now my life has changed. The crocodile has turned me in to a pauper. For two years I have been trying to recover at no avail. I live on food handouts because I am too weak to fend for myself, I used to.   My informal business of cooking and selling Tswii has stopped because I am too weak.’’

As if this is not enough, her daughter Cecilia is still suffering from post-traumatic attacks emanating from the attack. Now the family is deep in to poverty as their way of live has taken a dent while they can’t return to the waters to dig Tswii.

Another woman, Buchilani Masole was on 12th April 2016 attacked by an elephant while on duty at Kwando Safari Camp in the Okavango Delta. The elephant charged on her and she sustained a dislocated collar bone on the right arm leading to her shoulder being dysfunctional.

OHWCF noted that in both cases the victims were performing their day-to-day functions but their encounter with wildlife has affected their lives.

In October 2022, OHWCF in conjunction with Botswana Golf Union hosted a Charity Golf Tournament in Kasane at Cresta Mowana Golf course to raise funds to help support people living with permanent injuries due to Human-Wildlife Conflict.

At the tournament, Chobe native Luckson Likokoto donated the two washing machines which were handed by Okavango Research Institute’s Prof. Joseph Mbaiwa at Maun Lodge to the two women recently.

Handing over the donation Prof Mbaiwa explained that helping victims of human and wildlife conflicts can go a long way in promoting the coexistence of human and wildlife. He said when people lose their livelihoods due to sustaining permanent injuries this could brew negative perceptions towards wildlife and lead to escalation of problems such as poaching.

Prof. Mbaiwa said: ‘’ even the phrase human and wildlife conflict have to be rethought. Some argue it could create negativity   towards wildlife. A term like human and wildlife interaction could promote coexistence. But for coexistence to be successful we need support structures for people whose lives are affected by interaction. Donations like this one are welcome and should be more encouraged.’’