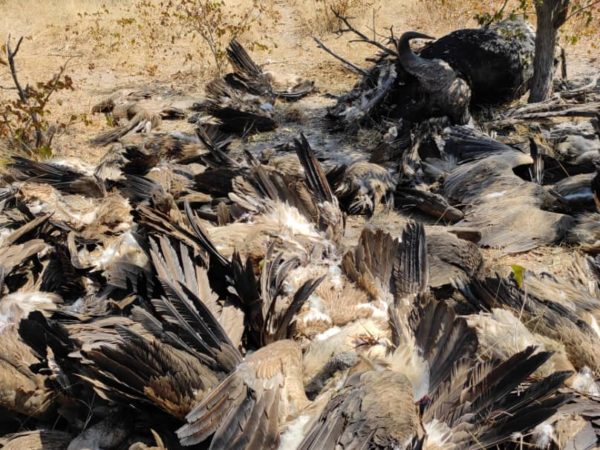 Department of Wildlife and National Parks (DWNP) has confirmed the discovery of 50 poisoned White- backed vultures at CH 1 in Chobe district.

Ch1 is a community concession managed by Chobe Enclave Conservation Trust (CECT). The vultures were discovered by DWNP officers on Tuesday along the western boundary of CH1 and Chobe National Park. The incident happened less than 20m off a well-used track.

Phologolo explained that 50 Vultures appear to have died after feeding on poached Buffalo carcass laced with poison. ‘’ we received a report on Monday and went to investigate on Tuesday.  We found 50 white back vultures dead and on further investigation we discovered a carcass of a buffalo. The buffalo carcasses was missing a thigh and the tail which appeared to have been severed off. We concluded that someone killed the buffalo and laced it with poison to bait the vultures.’’

Phologolo explained that even more surprising was the discovery that some of the dead vultures had heads, feet and internal organs removed.  He added that their suspicion is that the organs were harvested for medicinal use. ‘’ the organs were neatly removed using a knife. This is very uncommon in Botswana.’’ He added

In a similar incident, South African Publication, City Press has reported that over 100 vultures and a hyena died after feeding on a buffalo carcass near Punda in Kruger National Park, South Africa. The incident has equally been linked to poachers who use poison to kill vultures to resell their products to traditional healers.

Although the connection of the two incidents has not proven, however, it adds to a growing conservation concerns about the use of vulture products for medicinal purposes or Muthi, a term used in reference to the practice in Southern Africa.

Poniso Shamukuni, CECT Chairman, told The Okavango Express that although he has not yet been officially informed about the incident, it is unfortunate to lose such a high number of endangered vultures. ‘’ vultures are important for the ecological balance of nature. To lose such a high number especially at the time we are on a recovery phase from covid-19 is sad.’’

According to information on Birdlife Botswana website White-backed vultures are classified as critically endangered. African vultures have drastically plummeted over the last 30 years.