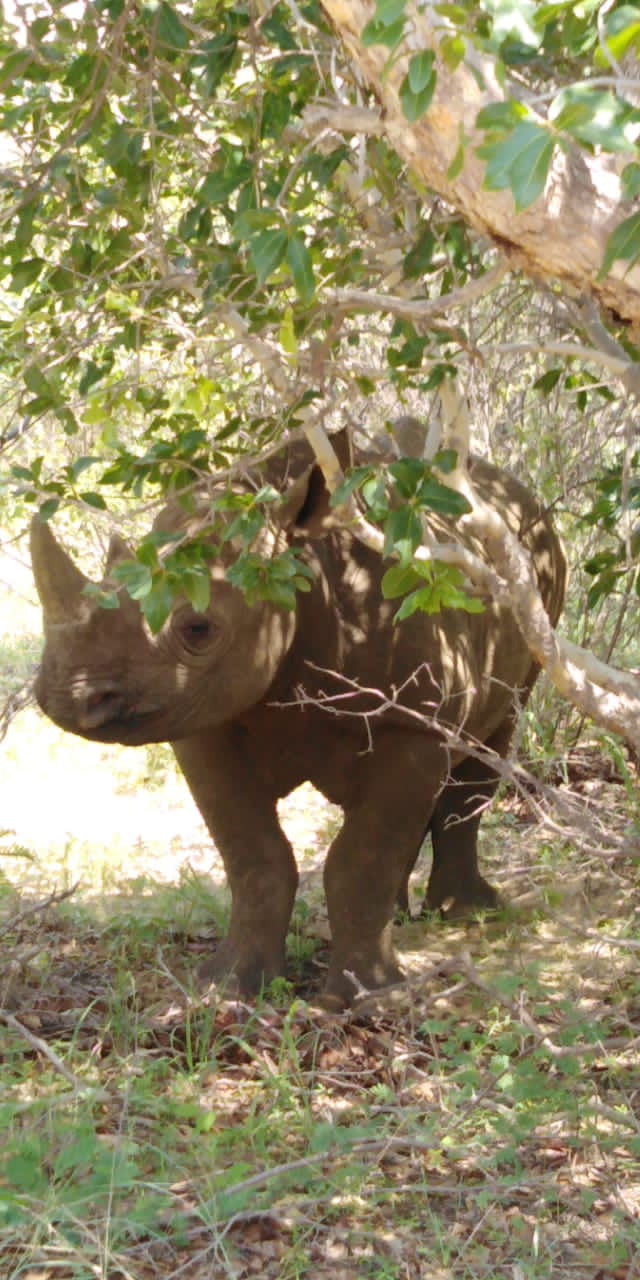 Black Rhinoceros calf ‘Sisboy’ named after Botswana President Mokgweetsi Masisi, was just 26 months when his mother was killed by poachers in the Okavango Delta.

Rhino poaching in Botswana’s Okavango Delta has worsened since 2019 with reports of almost a hundred rhinos having been killed by poachers despite Government dismissing the figure. It is understood that the delta had a total 300 rhinos, with the poaching increase forcing Government to translocate remaining Rhinos to a safer guarded facility.

Sisboy’s mother was gunned down by poachers in September 2019 in Mombo concession, viewed as one of safest parts of Okavango Delta at the time. The two foreign poachers involved were shot to death by Botswana Defence Force’s anti-poaching team.

Department of Wildlife and National Parks (DWNP) had to literally pull Sisboy away from its mother’s carcass where he had stayed awaiting her to wake up.  DWNP feared that if left in the bush the calf was going to stay at its mother’s carcass until he died.  So DWNP had to take it kilometres away for safety at Khama Rhino Sanctuary (KRS.)

The online story of the orphan led to many commentators pouring their grief for him. Some readers at the time suggested that young rhino must be sent to KRS while others suggested it must be given a name.

The author of the story, environmental journalist Boniface Keakabetse suggested the revered nickname of President Masisi: ‘Sisboy’ for the orphan.  .

The journalist hoped that giving the surviving rhino this presidential nickname would serve as a reminder to Batswana and Government about the impending danger posed by poaching to Botswana’s wildlife and the affiliated tourism sector.

Following the sad demise of his mother in the Delta, Sisboy as affectionately now called by wardens and guides at KRS has found a safe refuge.

The KRS has not recorded a single case of Rhino poaching since it was established 1992.  The oldest rhino at the refuge is a 42 year old white Rhino cow named ‘Curved Horn’ who was brought to the sanctuary from South Africa in 1980.

‘’ Sisboy was very depressed when he got here. He kept away from other rhinos and mainly wanted to be closer to humans all the time’’ Thapelo Baipheti Chief Warden of KRS recalled.

Baipheti was briefing Botswana media participants of the Space for Giants African Conservation Journalism Programme during their tour of KRS recently. He told Botswana media contingent that KRS is a community based project setup in 1992 to assist in saving the diminishing Botswana rhino population at the time.

KRS is tucked away on a piece of land covering approximately, 8585 hectares of Kalahari Sandveld.  Baipheti added that the sanctuary provides refuge and habitat for white and black rhino as well as over 30 other animal species and more than 230 species of birds.

Botswana Defence Force (BDF) provides security at the sanctuary and so far not a single poaching incident was recorded in the area.

Baipheti opined that the security offered by BDF and vigilance of stakeholders at all times are key to protecting the sanctuary in the wake of unprecedented rhino poaching experienced in the Okavango Delta. He stated that KRS location in the central region of Botswana compared to the vast and swampy Okavango Delta’s location in the boarder of Namibia has comparatively ensured KRS’s safety.

The chief warden said KRS annually spend P 200,000 on community projects in Serowe, Mabeleapudi and Paje villages. The villagers identify the projects they want to be sponsored by KRS.

Duncan Boikhutso, a guide at KRS added: ‘’ the community benefits help us ensure that the neighbouring communities support our efforts at saving these mega species. When the people derive the benefits they see the need to conserve and help to prevent poaching’’  Chief for Mabeleapudi Village, Sebonego Tebelelo who was also visited by media crew revealed that KRS donated funds for construction of a shelter for Kgotla (community meeting centre), procured air conditioners for community offices and helped with funds for various community celebrations. However, Chief Sebonego added that they have not got the assistance from KRS since the global coronavirus pandemic impact on the tourism sector from 2020 onwards