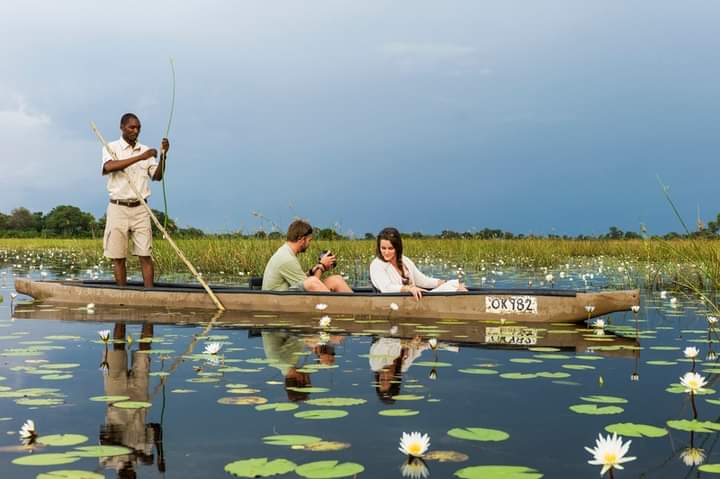 Adaptation to flood patterns and climate change is key to the sustainability of Mokoro (canoe) community poling tourism operations, a foundation of wildlife conservation and tourism in the Okavango Delta.

The Okavango River traverses three countries from its point of origin in Angola passing though Namibia in to Botswana where it later spread itself in to an inland wetland known as the Okavango Delta.

In the lower part of the Okavango Delta is located a Mokoro station called Boro 2.  The locals prefer to call the station: ‘DRC’ because of its liveliness with tourists.  This year Boro River dried-up dissipating prospects of a dozen residents dependent on the Mokoro operations.

OKMCT Seikaneng Moepedi told The Okavango Express: ’’ The aim of the Trust is to achieve wildlife conservation by ensuring that community members benefit financially from the product by poling and getting paid directly by tourists for the guiding services in NG 32.’’

‘’ our experience since the formation of the community trusts has shown that when the communities benefit from the wildlife resource they see a need to conserve it. Due to the impact of low floods and coronavirus the communities have not enjoyed full benefits they did before the covid era. We fear if the situation prevails people could be tempted to poach.’’

53 year old Keikantsemang Gorewang is one of the many women irking a living from poling tourists at Boro 2.

‘’. I learnt poling the wooden canoe in my youth.  The canoe has been my life for over 40 years. I make a living from poling tourists in to the delta to see wildlife.’’ She told the Okavango Express.

The mother of four shared that however the past three years have been tough for Mokoro polers citing a prolonged hydrological drought and the subsequent coronavirus pandemic. ‘’ in 2020 our channel dried up forcing us to relocate to neighboring Daunara station. In 2021 when the channel received some water our celebrations were cut short.   No tourists came due the travel restrictions caused by the global coronavirus pandemic. It has been doom for us.’’

Lenkamile Batsholelwang (42) obtained a poling license in 2005 and was also forced to relocate from Boro to Daunara. ‘’ it is tough for us here. We have been forced to leave our children behind. But there is no tourists coming yet and we don’t know for how long we will be forced to wait.’’

Batsholelwang expressed worry that since 1998 the channel has been drying quickly. ‘’ water comes only for a short time and dries quickly. Tourism is our only source of income because we cannot grow crops due to elephant’s damage. Those who keep livestock face a big problem of predators preying on their livestock.’’

Batsholelwang told The Okavango Express that he was suspicious that the drying spells could have contributed to the rise in rhino poaching in NG 32. ‘’ As soon the Delta dried up around 2019 we started hearing about the cases of rhino poaching. This continued during the covid 19 lockdown. We are suspicious that flooded river channels previously made it hard for poachers to traverse the vast Delta to poach.  When the channels dried up it made it easy for them to poach something that could have been worsened by limited movement in the area due to the lockdown.’’

Dr. Murray Hudson, research fellow at the Okavango Research Institute explained that the dry spells are part of the delta history.

Dr Hudson explained: ‘’ Okavango inflows are highly variable. Historically it is common to see several successive low inflows, resulting from successive years of low rainfall in the catchment. The likelihood of large changes to rainfall is not so certain; many models indicate the possibility of a bit less rain; others indicate the possibility of slightly increased rain along the Okavango catchment. The uncertainty about the direction of change in the rainfall makes it very difficult to attribute differences that we see in one or two years directly to climate change yet.

Dr Hudson was however in agreement that current climate modelling points to higher temperatures due to climate change in the delta. He lamented that losses of water from the Delta due to evaporation could lead to the reduction of flood size over the long term.

He challenged tourism operators in the Okavango Delta to change and adapt. ‘’They must be ready to adapt to the prevailing circumstances. This could mean, for example, setting up walking trails in the same areas where mokoro trails function in high water’’ he advised,