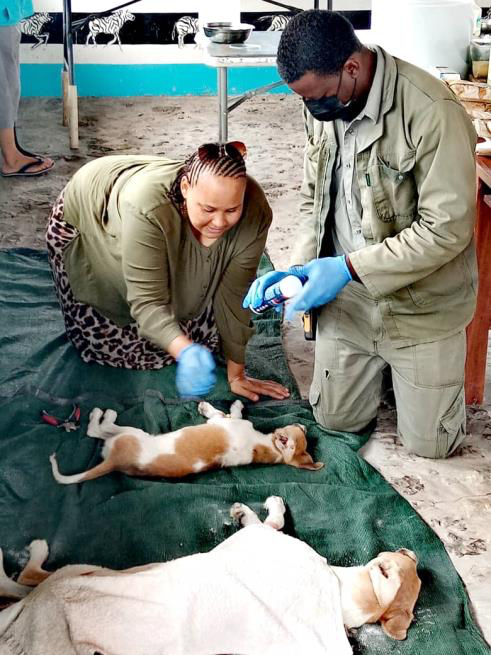 Eco-Tourism Company, Natural Selection is engaged in a project which aims to prevent the spread of diseases – in particular Canine Distemper Virus (CDV) -between domestic dogs and the Wild Dog population in the Okavango Delta.

The project which involves vaccination of domestic dogs is a collaboration between Natural Selection, Maun Animal Welfare Society and Botswana Predator Conservation Trust.

MAWS is a reputable non-governmental that works to protect Botswana wildlife through domestic animal care offering services such as free veterinary services to low income villagers in remote areas.  The Maun based BPCT on the other hand aims to preserve Africa’s African Wild Dog, Cheetah, Leopard, Lions and Spotted Hyenas through research and public education.

The organisations commenced the project in November 2021 in the villages of Khwai, Mababe and Sankuyo and Shorobe. The rationale being these are wildlife rich areas where people and wild animals live side by side therefore increasing the risk of diseases to spread from domestic animals to wildlife. There was a recent illness and death of a Wild Dog near Khwai Village serving as an example of this potential risk.

In total 111 domestic dogs were administered a 5 in 1 vaccination which covers Canine Distemper, Adenovirus, Hepatitis, Parvovirus and Parainfluenza. 109 dogs were vaccinated for Rabies and 3 dogs were sterilized. .

Dr Lalley added:  ‘’As Natural Selection we are committed to playing a leading role in the conservation of flora and fauna.  We work with other conservation stakeholders to implement various wildlife conservation projects’’.

According to Dr. Lalley disease management initiatives like this are critical for managing not only the health of village dogs, but are an essential component of protecting Botswana’s wildlife, National Parks, and Game Reserves. The vaccination programme creates a “buffer zone” against domestic animal diseases and wild animal populations.

Dr. Lalley reiterated that African Wild Dogs are classified as endangered by the International Union for Conservation of Nature (IUCN).  Research information shows that between 3,000 and 5,500 dogs are remaining in 600-1,000 packs, mostly in eastern and southern Africa.

According to the IUCN, one of the contributing factors to the Wild Dogs decline is habitat fragmentation.  It has however been noted that one of the primary threats to Wild Dogs is their susceptibility to viral diseases such as CDV. CDV is easily transmitted from domestic dogs to Wild Dogs. Unfortunately, Wild Dogs coming into contact with human settlements and their canine counterparts (domestic dogs) is unavoidable, especially for a wide ranging species in an increasingly fragmented environment.

‘’Therefore it is important for us as Natural Selection being an ecotourism company built on a conservation ethos, to add to the growing urgency to save this iconic species from extinction’’, she concluded.