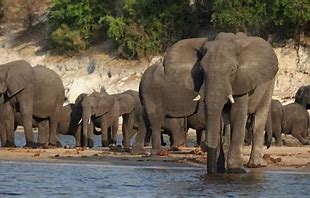 The exercise  is first ever elephant count in the five countries making KAZA: Angola, Botswana, Namibia, Zambia, and Zimbabwe, running from August to October.

The survey is part of the implementation of the KAZA treaty calling for ‘regionally integrated approaches towards harmonizing policies, strategies, and practices for managing shared natural resources straddling the international borders of KAZA Partner States.’

According to KAZA, the count is a fundamental component of the KAZA Strategic Planning Framework for the Conservation and Management of Elephants. It is also one of the action points of the 2019 Kasane Elephant Summit and a directive by the five KAZA members Heads of State.

The launch for the survey was done in 2021 by Teofilus Nghitila, Namibia’s Executive Director of the Ministry of Environment, Forestry and Tourism, who are the coordinating country for the KAZA TFCA.

Nghitila  said at the time: ‘’The elephant population of KAZA represents more than 50% of the remaining savanna elephants (Loxodonta Africana) found in Africa, a species recently listed by the International Union for the Conservation of Nature (IUCN) as globally Endangered. On a positive note, the IUCN Red List acknowledged that savanna elephants are stable or increasing in KAZA, unlike the rest of the continent, which is a clear testament of the positive outcomes of the management interventions within KAZA.’’

Dr Ben Okita, who co-chairs the International Union for Conservation of Nature (IUCN)  African elephant specialist group told The Okavango Express by email: ‘’ the IUCN/AfESG is aware  of the KAZA survey and will be using the results of the census to update the African Elephant Database and the African Savanna Elephant Status Report 2023. We have had a chance to speak with Dr. Russell Taylor who is involved in the KAZA census and is also a member of the IUCN/AfESG.’’

KAZA secretariat programme manager, Netsai Bollman confirmed to The Okavango Express: ‘’ we do not currently have an exact date when the survey will start. We can only say mid-August until mid-October. We are still in the process of finalising logistics and are not yet in a position to confirm an exact date.’’

The survey is expected cost of nearly US $3 million and will help in conservation of elephants and inform conservation strategies for a shared response in dealing with regional problems such as cross boarder poaching.

Seven aircrafts fitted with cameras would be flying at the same time starting in Zimbabwe sifting across the 519 000 square kilometre KAZA landscape.

Dr. Taylor told Daily News that while individual countries conducted their own surveys at different times it was possible that some elephant were missed or double counted as they migrated across the KAZA landscape and counting them all at once would get the correct estimated number.  “Knowing the KAZA elephant population will inform management decisions by partner states and each country will better manage its animals because the survey will determine their distributions. The survey is designed to cover all areas where elephants are, including communal land, forest land, protected areas, national parks, game reserves and safaris,” he was quoted by Daily News